An Octopus in trouble

Once upon a time there was a shy and quiet octopus. He nearly always went about on his own because, although he wanted to have lots of friends, he was too self-conscious.

One day, the octopus was trying to catch a very slippery oyster. Before he knew it, he had tied himself into one massive knot, and he couldn’t move. He tried with all his strength to wriggle free, but it was no good.

In the end, despite the great embarrassment he felt at being seen in such a tangle, he had to ask for help from the passing fish.

Many fish swam past, ignoring him, but one very kind little fish offered to help to untie all those tentacles from all those suckers.

The octopus felt heartily relieved when he was finally set free, but he was so shy that he didn’t dare talk to the fish and make friends with him. He simply thanked the fish, and quickly swam off.

Later, the octopus spent the whole night thinking that he had wasted a great opportunity to make friends with that very kind little fish.

A couple of days later the octopus was resting between some rocks, when he noticed that everyone around was hurriedly swimming past. He looked into the distance and saw an enormous fish coming over to feed in that area.

The octopus quickly hid; then, peeping an eye out from his hiding place, he saw that the huge fish was chasing the kind little fish who had untied him.

That little fish really needed urgent help, but the big fish was so dangerous-looking that no one dared to go near.

The octopus, remembering how the little fish had helped him, felt that he had to do whatever he could to come to his aid.

Without hesitating, the octopus shot out from the rocks, like a ray. He put himself right in the path of the giant fish, and before the fish could do anything about it, the octopus had shot out the biggest jet of ink of his life.

He grabbed the little fish, and swam off back to hide in the rocks. Everything happened so fast that the big fish had no time to react.

However, he soon recovered from the surprise. Off he went to the rocks, looking for the octopus and the little fish. Now he really wanted to gobble them down!

Soon, though, he began feeling a terrible itch; first in his gills, and then in his fins, and then all over his body.

It turned out that this giant fish had a very artistic nature, he adored colours; and the octopus’s dark ink had given him a terrible allergy!!
So the big fish swam away, irritated all over.

As soon as he was gone, all the fish who had been hiding came and congratulated the octopus for being so brave.

Then the little fish told them all how he had helped the octopus a few days earlier, but he had never known anyone be so grateful that they would end up doing something so dangerous.

Hearing this, the other fish discovered how nice the shy octopus was, and everyone around was keen to be the friend of such a brave and honorable octopus. 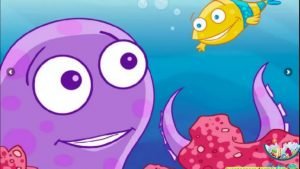